What is Coffin Lowry Syndrome? 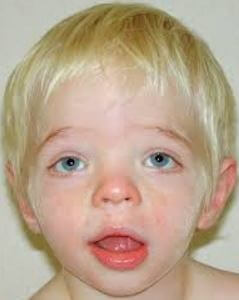 
In an emotional moment, or exposure to unexpected noise can cause the brief collapse to the patients, however, without loss of consciousness4,5. In Coffin Lowry syndrome is an inherited disorder, in which an X-linked dominant genetic trait get affected. But, this disease may not be hereditary, as approximately, 70-80 percent of affected individuals do not have a family history. Therefore, Coffin Lowry syndrome can be an acquired condition.


Cultured serological testing in the laboratory showed that reduce the functioning of the ribosomal S6 kinase activity in the fibroblast and lymphoblast cells transformation found in affected male individuals.

Neuroimaging studies and X-ray imaging tools are used to detect the skeletal system and other abnormalities.

The specimen is collected from blood sample or cells can collect from a cheek swab to conduct molecular genetic testing. This test report provides information about RSK2 gene mutation. This is a confirmatory test for detection of Coffin Lowry syndrome. But some individuals with Coffin  Lowry syndrome do not possess a detectable mutation2,3,5.

Coffin Lowry syndrome has no definite treatment. But the aim of the treatment is to provide relief from symptoms and provide supportive care. Routine check up for cardiac activity, visual and hearing examinations.

The progressive condition of Kyphoscoliosis (a combination of musculoskeletal malformation which provides abnormal curvature in the spine) needs to monitor, as it often provides life-threatening outcome like compromised cardio-respiratory functioning.

Clonazepam is an antiepileptic medication usually prescribed to control convulsion.

Genetic counseling is recommended for providing supportive care to patients and caregivers3,4,5.

The exact data is not available due to the scarcity of the medical reports. However, affected males have shorter life expectancy than females. Females affected individuals can survive until their old age. A different case report showed male affected individuals usually enjoy their life at the age of 26 years and that can expand to 35 years. Usually, male patients with more than 35 years age gradually deteriorate their condition and confined to bed, incontinent, and unresponsive.

The usual cause of death is myocarditis, pneumonia or severe convulsive disorders. Complications related to general anesthesia usually affects during surgical intervention for correction skeletal system malformation or dental extraction2.